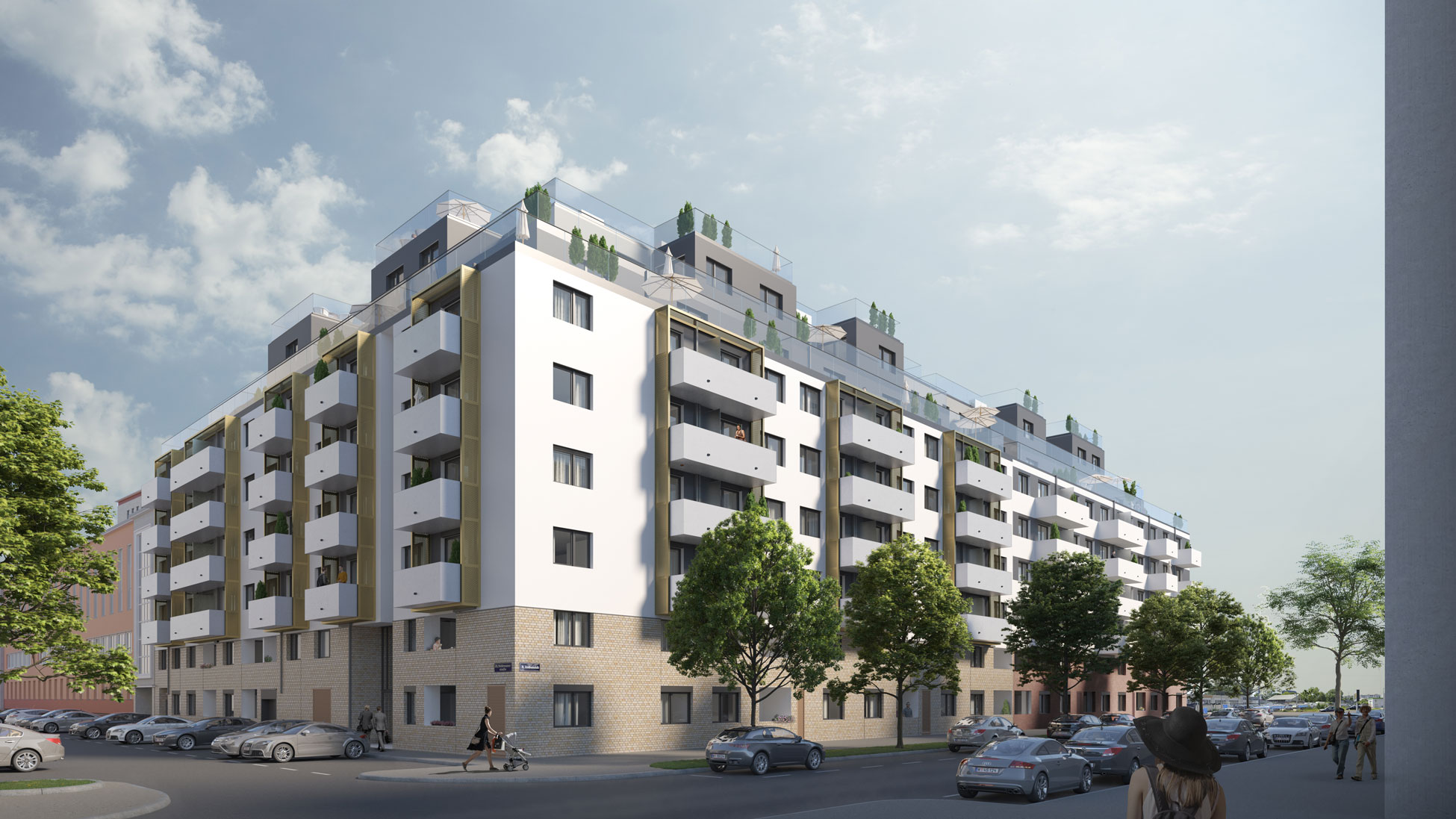 The property directly on Höchstädtplatz, which was acquired in 2017 in equal shares with DWK (Die Wohnkompanie), has been developed as a whole in a project consortium. Now that the real estate division has been completed, the 6B47 project share is being sold to S+B Gruppe AG.

"The TownUp project clearly demonstrates our approach according to our motto 'The different way to develop real estate', in which we again implement a conversion project from office to residential use and realise it, while also taking the protection of historical monuments and the conservation of resources into account. This has met with a positive response on the market," says a pleased COO Friedrich Gruber.

Wolfdieter Jarisch, CEO and shareholder of the S+B Group: "We are pleased to have come together again with 6B47 and to realise another exciting project. We will take further planning steps and would like to set new standards for the future, especially in the areas of IT, technology, network availability/quality and digitalisation structure."

There is a legally binding building permit for the project. After further planning steps, the realisation is to be initiated quickly.

The existing development consists of a high-rise office building (former headquarters of GLOBUS Verlag) with eight stories, another office wing (planned by the famous architect Margarete Schütte-Lihotzky) with four stories, and a new office wing with two stories, plus a commercial wing that has already been demolished. In total, the project part of 6B47 comprises four buildings with a usable floor space of around 17,400 m2. In the course of the redevelopment, the existing buildings, which are listed as historic monuments, will be raised by one story each in consultation with the Federal Office for the Protection of Historic Monuments, and converted into flats.

The demolition of the area that is not listed has been completed in the meantime, and a new residential building is also planned for these areas.

In addition, a two-story underground car park with 265 parking spaces is being built across the entire development.  A total of around 384 residential units are being built on the entire site.

The open spaces in the inner courtyard form the green centre of the site. Another asset of the project is the planned food market in the base zone.

About 6B47 Real Estate Investors AG

6B47 Real Estate Investors is an internationally oriented real estate developer based in Vienna with offices in Düsseldorf, Berlin, Munich and Warsaw and concentrates its business activities on metropolitan regions in Austria, Germany and Poland. The company currently manages a project volume of around 1.6 billion euros, making it one of the leading providers in the sector in Austria, Germany and Poland. The entire value chain is covered, from project development to realisation and utilisation. The company's business model also includes real estate financing as an integral part of project development.

About S + B Gruppe

For more than 35 years, S+B Group AG - an internationally active, private project developer in Vienna, Warsaw, Prague and Bucharest - has been realising complex projects as an investor and total buyer.

The family-run team around the Vorarlberg building contractor Reinhard Schertler and the Viennese general planner Alfred Michael Beck with the long-standing board members Wolfdieter Jarisch for Austria and Franz Paul Bauer for the CEE area and the two board members Edmund Völker and Wolfgang Eder for finances and balance sheets specialises in the planning, construction management, commercial control and marketing of high-quality building projects. Numerous major projects are currently under construction in Central and Eastern Europe. With an investment volume of more than 4 billion Euros, properties with 1,200,000 m² of usable space have already been realised.

Pictures may be reprinted free of charge. Projects
6B47: Laying of the foundation stone in Düsseldorf - "New H" office and commercial building to become the new neighbour of Deutsche Oper am Rhein
8.07.2021