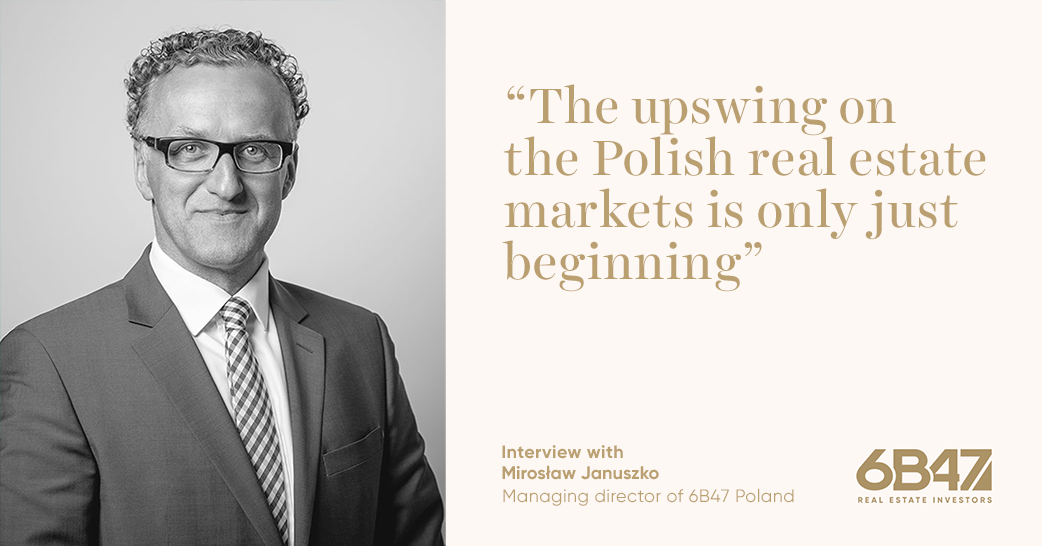 6B47 Real Estate Investors AG has been active in the major Polish cities with its subsidiary 6B47 Poland since 2014. In the meantime the local team headed by managing director Mirosław Januszko has been able to acquire numerous plots of land, and thus consistently develop its own project pipeline. In the interview he explains the potential he sees for the Polish markets, which plans 6B47 is currently pursuing on this exciting target market, and what lies ahead in the future.

Mr Januszko, the residential rental markets in the Polish metropolises have seen strong growth of late. Why is this?

Occupying one’s own condominium was something many Poles took for granted for a long time. At the very latest this changed significantly in the years 2010 to 2019. The reasons for this are to be found in demographic shifts and the changing priorities of young Poles: many well-educated and well-trained people are moving into the expanding cities, where they initially want to gain a foothold and launch their careers. Accordingly, they start a family much later in life – and in the meantime spend their money on things other than buying their own home. For these people a rented solution is a much stronger option than it was for their parents’ generation.

How is it then that so many condominiums are still being sold in Polish towns and cities?

It is true that above all Warsaw has one of the most vital apartment markets in the whole of Europe. In 2019, for example, more newly-built condominiums were sold there than in London – both in absolute numbers as well as per capita. In this respect it is not only owner-occupiers who are buying property, but in many cases also investors wanting to take advantage of the growth potential on the rental markets. This development has also been favoured by the fact that wealth is increasing significantly faster in Poland than in the other countries in the CEE region (Central and Eastern Europe), meaning that many households have sufficient capital reserves. Moreover, the taxes incurred are quite low. Another important fact is that many existing properties which have been owned for decades by their inhabitants are now starting to show their age. They no longer meet the expectations of young people, and so new-build apartments of a high quality and which are still affordable are naturally also attractive for owner-occupiers.

Is the interest of institutional investors in Polish real estate also so great?

Definitely. What we are actually seeing within the CEE region is that the significant and large market players are currently interested in Polish real estate above all and less so in properties in the rest of the CEE area. The Warsaw market alone accounts for about seven per cent of the entire transaction volume in the CEE region, as much as in the Czech Republic as a whole. If one considers all the Polish locations, the figure is as high as 60 per cent. This is also reflected in the dynamic increase in rents and purchase prices.

If the market is so attractive – why have so few residential complexes been bought by institutional investors to date?

The Polish markets are not free of challenges. On the one hand, rent levels are low at a monthly average equivalent of about 350 to 400 euros, which is why major international developers and also property managers have in part not yet completed their market entry due to the lower absolute project volumes. Local actors, in contrast, cannot always meet the quality requirements of institutional investors. In addition, some of the developers are very cautious when it comes to sales to institutional investors – they quite simply fear price mark-downs with a global sale. We have positioned ourselves in Poland with 6B47 as an agile developer, facilitating early-stage project entry for co-investors. Thus our business partners can participate directly in the value appreciation – which they cannot with junior or senior loans for example. A further challenge is the fact that plots of land for development are quite rare, and in particular in Warsaw. For this reason supply and market access are limited. With our Polish team we at 6B47 have been able to secure promising plots of land since 2014, however, and thus develop a stable project pipeline.

What do you plan to do with these plots of land?

This varies from case to case. Our two core locations Warsaw and Wrocław offer potential in very different market segments. Alongside classical residential units in widely differing price categories, we are also interested in residential and commercial short-term furnished apartments – i.e. serviced apartments and student flats. In 2020 we began with the development of a property in this segment – the “Grochowska” project – for the first time ever. In the development and fine-tuning of such real estate concepts we always pay attention to the defining megatrends and the particular features of the micro location. For example, at the moment the subway infrastructure is being developed in Warsaw, and thus people’s mobility is being further enhanced and the status of some micro locations is being upgraded.

Are there objectives that are particularly important to you?

We primarily focus on two things above all. Firstly, as part of the international investment platform 6B47 we want to facilitate market access in Poland to our co-investors in a form which they otherwise rarely enjoy. Secondly, we would above all like to realise real estate projects which become landmarks in the respective locations. Of particular importance to us here is a high ESG standard, which is quite expressly also intended to provide stimulus for other developers in Poland: with new builds our minimum aspiration is LEED Gold certification.

Which accents do you want to set for the future with the team at 6B47 Poland?

I am convinced that the market upswing in Warsaw, and also in Wrocław, Krakow and the Tri-City (Gdansk, Gdynia, Sopot), is only just beginning. There is still a great deal of potential on the markets which we would like to tap in the residential segment above all. Another important step for the future could be a further significant increase in our commitment in the field of office real estate within Warsaw. Major international companies are expanding to Poland, and there is tremendous potential in the field of business project outsourcing (BPO) in particular. And Brexit has also led to many jobs being transferred from the United Kingdom to Poland. It is no wonder, therefore, that the tallest office tower in Europe is currently being built in Warsaw. Accordingly, the market for office real estate investments is opening up – a development which we aim to actively shape. And we intend to develop conversion concepts for the dated office properties which have been empty since the outbreak of the Covid-19 pandemic and convert these buildings into modern residential units. ISSUE 03/2022
Simply photovoltaics is not enough for us: CO2 free thanks to anergy at the "Steingötterhof"