The housing of the future is flexible: "Steingötterhof" in Sankt Pölten

The Lower Austrian provincial capital of Sankt Pölten is one of the most historic cities in all of Europe - and at the same time a strong growth location for the future. This is underlined, among other things, by the current urban development concept, which, according to the municipality, lays the foundation for a population growth of currently 54,000 to up to 65,000 inhabitants in the next five years.

Closely linked to these growth impulses is above all the demand for modern, high-quality and sustainable living space. For this reason, 6B47 is currently developing the "Steingötterhof", an area of around 22,000 square metres in Dr.-Wilhelm-Steingötter-Strasse. The location in the north of the state capital offers both urban infrastructure in the form of shopping facilities and the university hospital as a nearby employer as well as ideal access to the Großer Viehofner See lake and the surrounding green spaces.

The apartments adapt to the megatrends

Similar to most new construction projects that pursue a modern space concept, the "Steingötterhof" also offers five different apartment types with one to five rooms and a floor area of around 33 to 115 square meters as well as qualitative features. These enable a lively mix of single people, families and, among other things, multigenerational living. The special feature of the "Steingötterhof" is that the individual floor plans can be combined according to the modular principle - even faster and easier than usual, after the completion of the project. This means, for example, that two Type B apartments can be combined to create a Type D apartment that is twice as large. 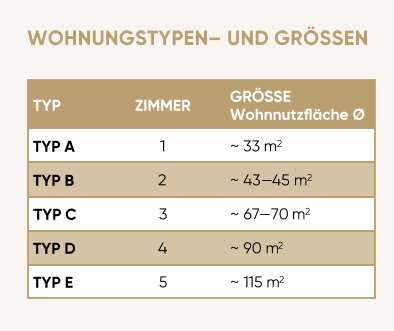 The property can be adapted to the demographic development of Sankt Pölten throughout its life cycle with little technical and financial effort: Currently, demand for microapartments and single apartments is very high - similar to many other German-speaking cities. However, should larger living spaces be required again in the future, four- or even five-room apartments can be generated without having to intervene in the supporting building structure. The reverse is also possible by inserting non-load-bearing partition walls. The accesses and the building infrastructure are designed in such a way that no unusable or unrentable residual areas are created.

We live in a time in which social megatrends are changing faster than ever before - and at the same time, forms of living and lifestyles are becoming ever more differentiated. So while the real estate projects of the future will also become even more individualized than they are today, flexible construction in particular will increasingly become a key factor. That is why we at 6B47 want to and will use the knowledge gained in the development of the "Steingötterhof" as added value for numerous future project developments in Austria and Germany. ISSUE 02/2022
Brave new financing world: Why banks are becoming more cautious - and how ESG is becoming a performance factor
Issue Q1/2022
FRANCIS – the most sustainable office building in Vienna is being created by retaining the fabric of the original construction