The hot city: measures against declining quality of life 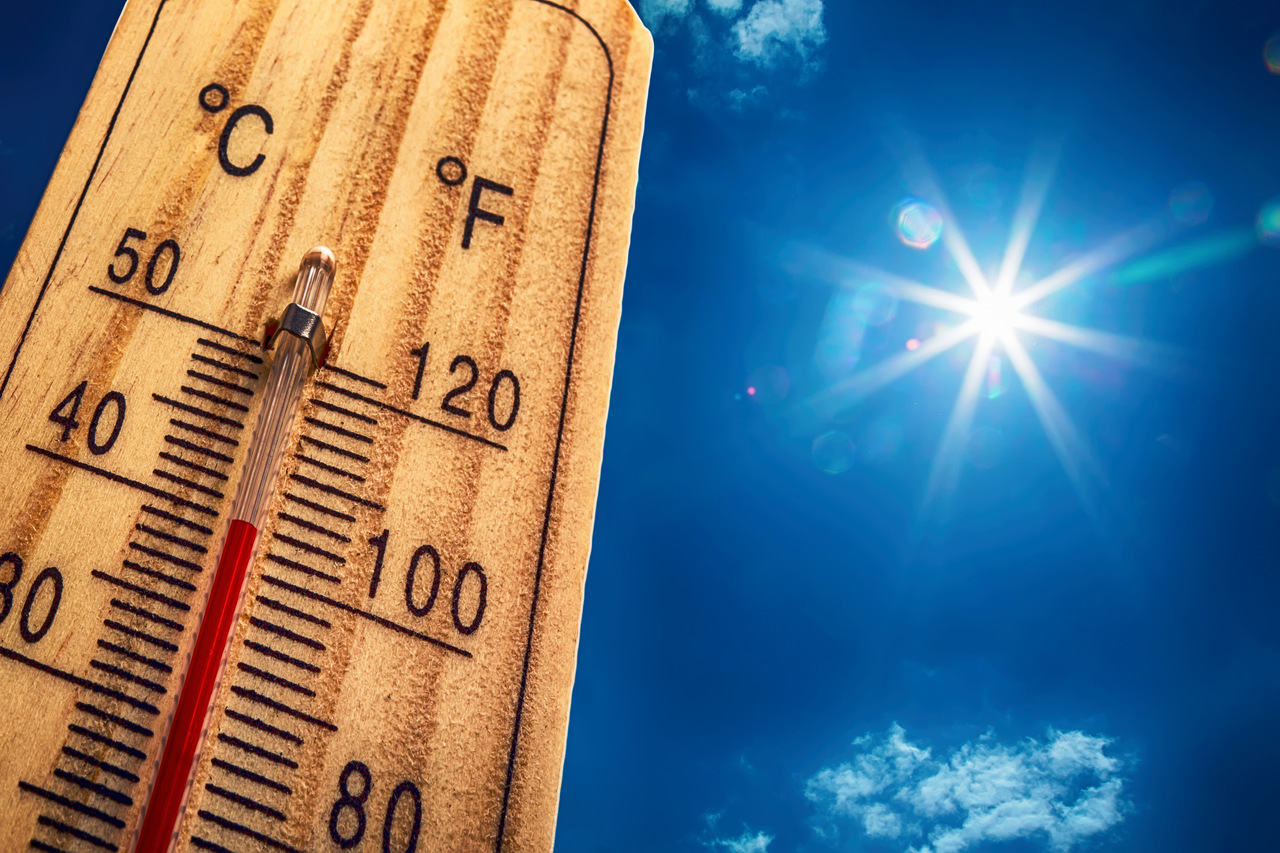 Consistent redensification of urban spaces has long been the general consensus in the DACH region. Wherever possible, project developers are venturing into the vertical realm and building new high-rises. And politicians are also constantly creating new legal foundations for greater interior densification, especially for apartments. A current example of this can be found in the German Building Land Mobilization Act, which among other regulations provides for precisely this.

However, there is one central problem: If we close gaps between buildings and build more efficiently in our cities, they will also heat up more. In most cases, streets, parking lots and facades store heat from solar radiation for much longer than unsealed open spaces and green courtyards. In addition, overly dense and high buildings cut off wind circulation and thus restrict air exchange. And this in the midst of the man-made climate change.

In Asian metropolises, these effects have already become quite evident. For example, after the city-state of Singapore warmed up twice as much as the rest of the world's metropolises in the 2010s, extensive countermeasures were introduced from 2017 to cool the city. Among other things, a district cooling network was installed, open spaces were planted and new ecological construction projects were initiated. All of this is under the banner of "Garden City Singapore," an idea introduced as early as 1967 by the then prime minister and now gradually being put into practice.

Singapore demonstrates both: the constant heating of a densely populated city and the effectiveness of large-scale countermeasures

Need for action on the doorstep

For the DACH region, such heat scenarios sounded rather abstract until recently. But not least the past summer of 2020, which set a new heat record in Europe, has shown how much the quality of life can decline with persistent temperature stress. A year earlier, in 2019, Tom Crowther, who teaches at ETH Zurich, had already caused a stir with a study. According to the results, European metropolises will warm up drastically in some cases by the year 2050. In one respect, Vienna is even among the highest in the ranking: the average temperature increase in the warmest month is expected to be up to 7.6 degrees - which is why some media already drew a climatic comparison with North Macedonia after the study was published.

Heat peaks pose enormous challenges for urban planners, but also for real estate developers. After all, there is no quick fix for the problem. In addition, there is a complex interplay between outdoor and indoor spaces: Even building insulation and high energy standards alone are of little help once the building itself has heated up. If, in turn, massive use is made of conventional air-conditioning systems to cool the interior spaces, this would be extremely harmful to the climate.

Comprehensive and effective concepts for sustainable cooling of our cities must therefore be implemented now - long before the problem becomes too acute in our metropolises. The measures in Singapore can certainly serve as inspiration, but they must be adapted appropriately for cities in the DACH region. This requires constructive dialog between all stakeholders from the private sector and the responsible building and planning authorities, because many solutions involve conflicting goals: Vienna's current regulation on facade greening, for example, stipulates that all high-rise buildings must be partially planted. This is an effective means of combating outdoor and indoor heat as well as poor urban air, but it entails follow-up costs and further challenges for the developer, such as a constant maintenance requirement and even possible structural consequences. Similarly, installing green spaces and deconstructing parking lots also makes sense from an environmental perspective, but reduces leasable space. Instead, underground parking garages could be developed, while modern mobility concepts such as car sharing reduce the need for parking itself. 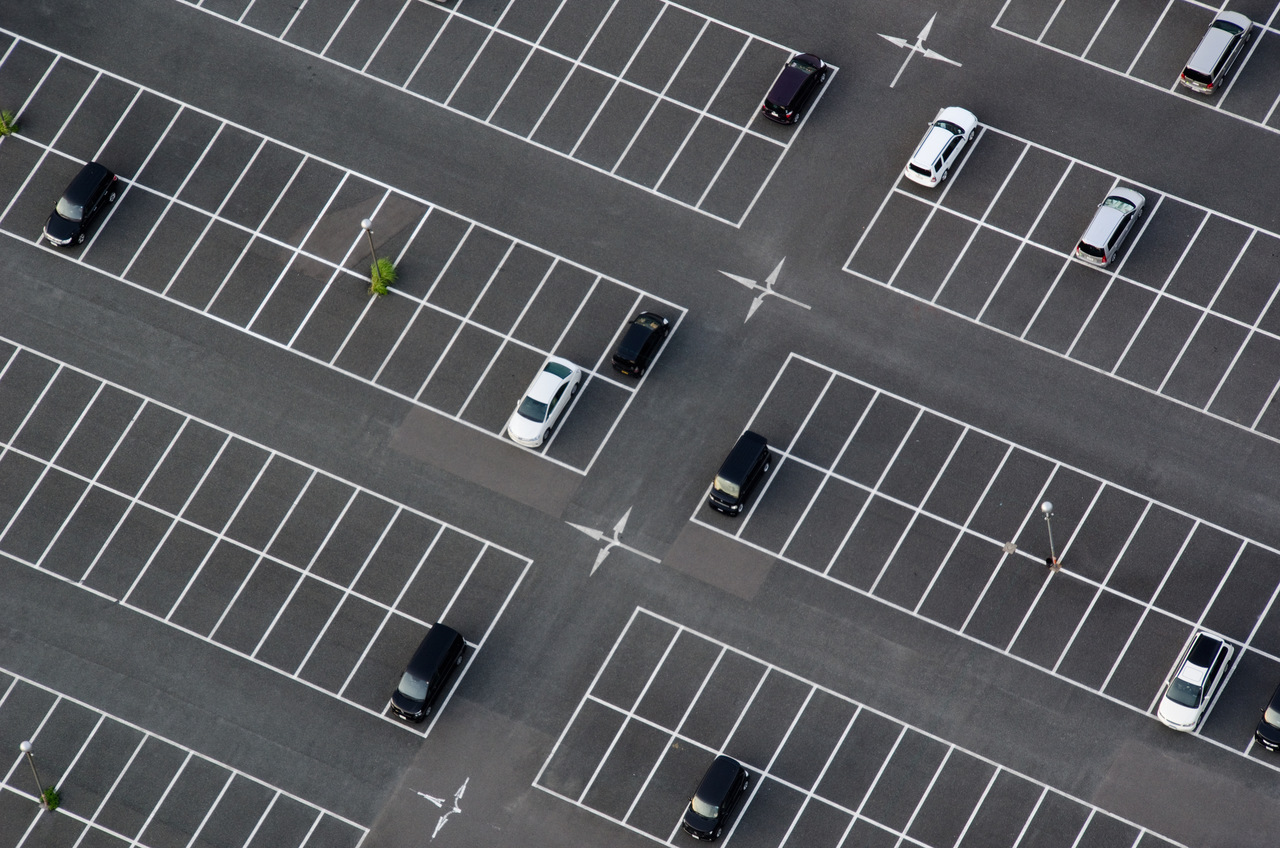 Parking lots store a particularly large amount of solar heat with their asphalt. Modern mobility concepts such as car sharing could provide a remedy and enable a reduction

This requires a change of mindset in the real estate industry. Consistently following ESG standards also means foregoing additional revenue where necessary. In the long term, however, this also pays off economically, because green areas and other spaces that do not generate any revenue themselves increase the quality of life and work for all people in the respective neighbourhood and thus ensure an added value of the micro-location. Conversely, however, cities should act as unrestrictively as possible and encourage action rather than just requiring it. This could include, for example, a model that provides clear legal guidelines but can be adjusted as needed. One example is the Environment Act in the Netherlands, which, unlike many other building codes, basically allows for deviation from the actual standard - as long as all parties involved agree. In Germany, for example, deviations are possible - for instance, with regard to the maximum use of land beyond the limits of the Building Use Ordinance - but such deviations are rather tightly regulated.

Keeping an eye on economies of scale in urban planning

Just as with the question of energy-saving heating, the cooling of our cities must be developed on the basis of political as well as planning guidelines and measures, and implemented from project to project with modern and climate-friendly new buildings.

The best example of such a measure at city level is the establishment of a district cooling network similar to the district heating network in most cities. The idea, which has also been implemented in Singapore, is by no means new - for example, a centralized supply system using compression chillers already existed in what is now Chemnitz (then Karl-Marx-Stadt) in the 1970s. However, the feasibility of such a measure varies in difficulty from city to city - which is due, among other things, to building planning aspects or the existing built environment. 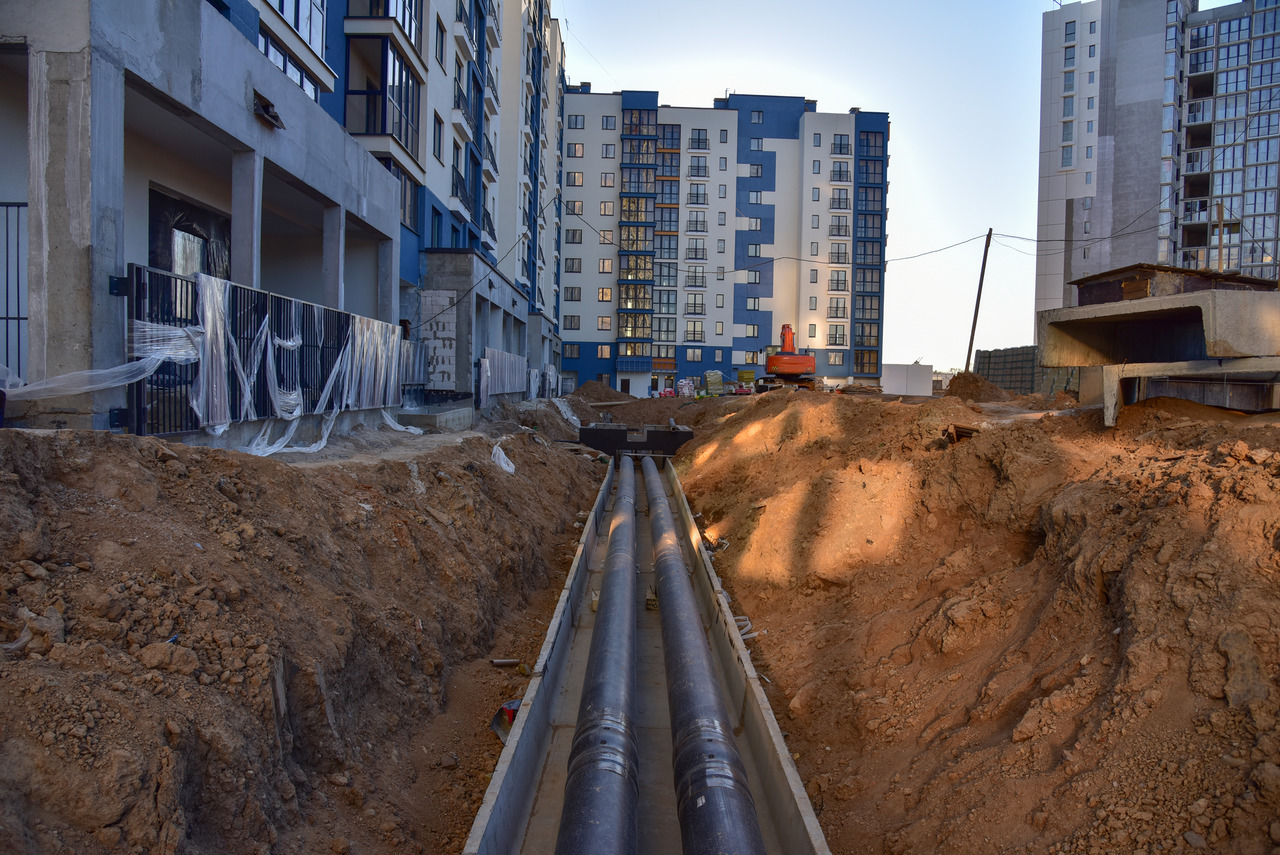 Moreover, just as with the air-conditioning systems mentioned previously, the question is how to find a variant of indoor cooling that is as energy-efficient as possible at the city level. In addition to conventional centralized methods, research is being conducted into alternative approaches, as the example of the Vienna pilot project for a so-called decentralized anergy network shows: For this, geothermal probes at a depth of about 100 meters are used as intermediate storage for summer heat and winter cold. This approach has been successfully implemented in two housing estates in Vienna. According to an article in the building trade journal a3BAU, the use of an anergy network for a nineteenth-century residential building would already amortize after 20 years. Particularly for the beautiful but less energy-efficient old buildings, a high level of fossil fuel savings can be made in heating, as well as in cooling.

Another approach at the city level, but one that can also be implemented by the private real estate industry, is the consistent use of the natural cooling effect of water. According to geographer Komali Yenneti of the University of Wolverhampton, urban areas can be cooled by three to eight degrees using water and water vapor in the form of water basins, fountains or even sprinkler systems. In conjunction with targeted greening - for example of waterfronts and in urban parks - the quality of life can also be improved. Examples like these show that the means to cool our cities can be put to good use even on a smaller scale in private-sector real estate projects. 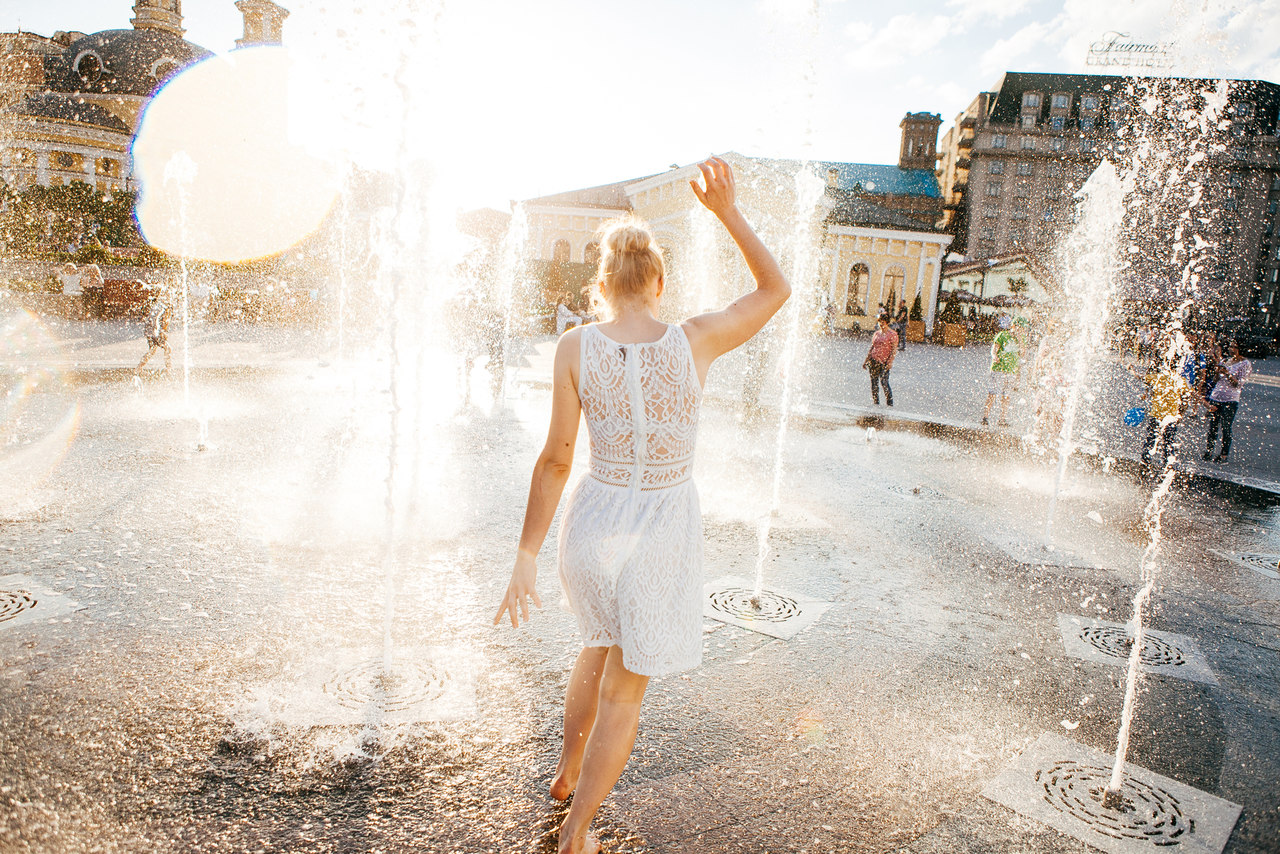 Knowledge exchange from project to project

While concrete and asphalt store the sun's thermal radiation, reflective building materials have the exact opposite effect. Roof surfaces in particular play an important role here. In New York, hundreds of thousands of square meters of roof surface have already been painted white, and science has also confirmed the success of such methods. A simulation for a neighbourhood in the Argentine city of Mendoza showed that for every ten percent increase in reflective radiation (albedo) on horizontal roofs, the outside temperature dropped by 0.75 degrees each. For the exterior facade, however, the picture was exactly the opposite: there, highly reflective materials actually increase the outside temperature, which also makes the use of reflective glass potentially difficult. 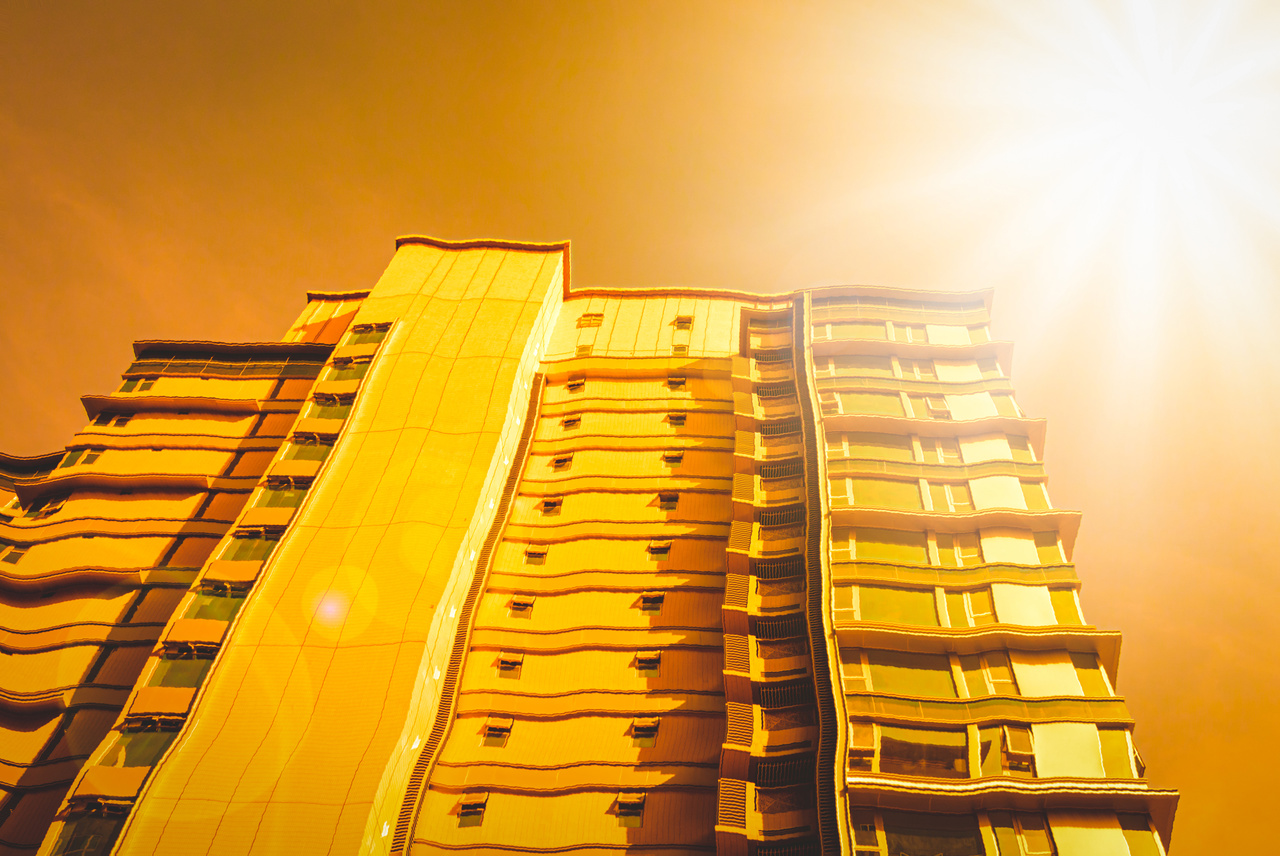 But what is the best possible solution for new developments - within the scope of the other important goals that are part of many ESG criteria catalogues? Is it better to landscape roofs or to paint them white? Or would it be better to install a photovoltaic system in combination with a heat pump to generate green energy and cool the interior of the building at the same time?

Similar to the topic of urban development, the answers to these questions should not remain the domain of individual players. Rather, an exchange of knowledge across company boundaries is the means of choice. After all, it is primarily combined effects that create the best results. So whether the project on the neighbouring property is possibly being developed by a competitor is of little importance from a climatic perspective.

The quality of the cooling is important

The aforementioned exchange of knowledge should also relate to the question of which cooling technology should be used within the property. This is where perhaps the most important parameters arise in terms of occupancy quality - because not all cooling is the same. Conventional cooling systems work by means of air flow. The disadvantages of this technology have been known since before the COVID 19 pandemic: Pathogens spread through the air conditioning system, while the dry air dries out mucous membranes and creates dust turbulence. Heating and cooling radiators, on the other hand, provide a more natural way of cooling that also requires only about half the energy. 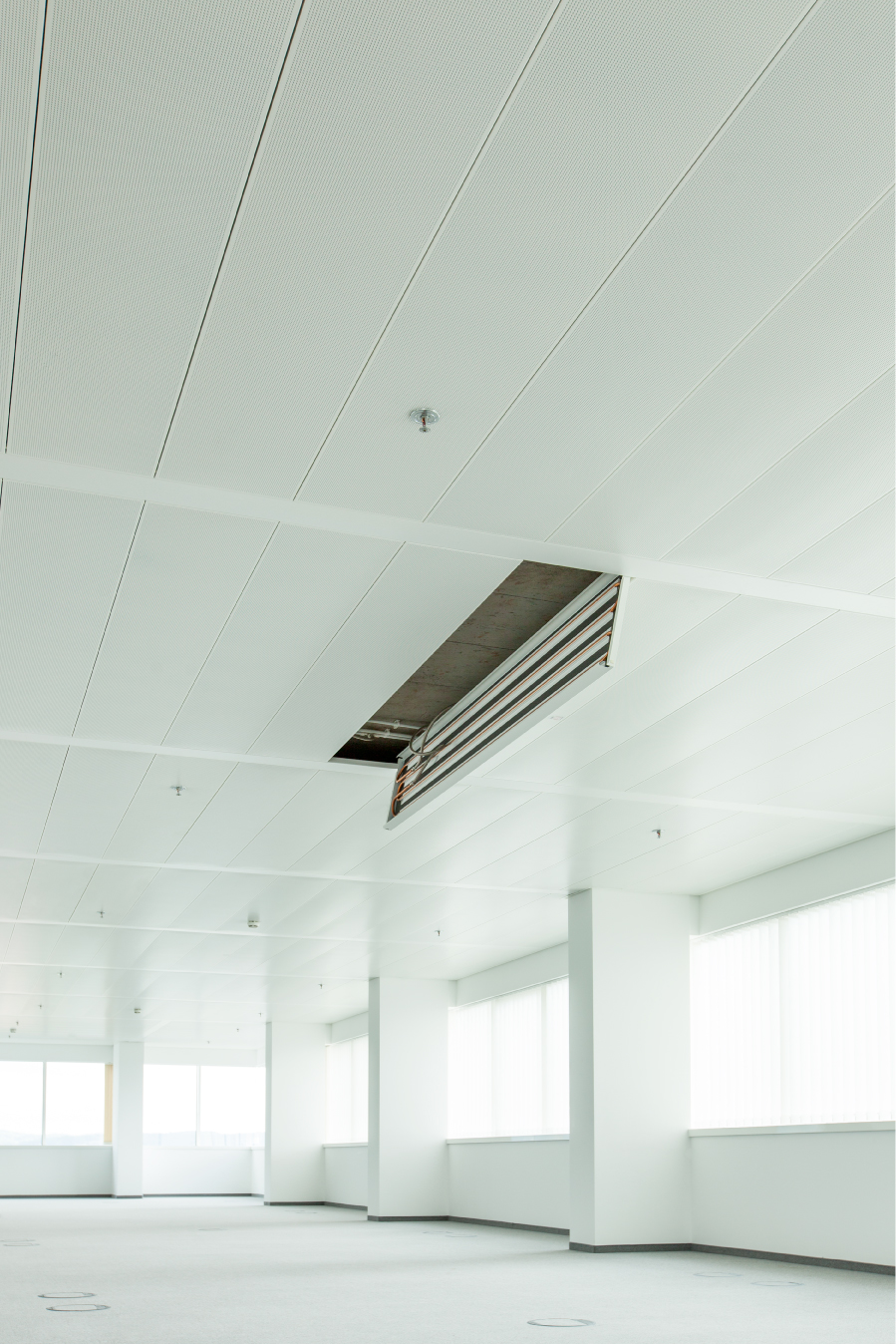 In our current expert interview with Dr. Wolfgang Kristinus from B+M Baustoff + Metall, you can find out how the corresponding systems can be installed and which other technical devices can lead the way to efficient building cooling.