The real estate industry must, can and will make a contribution to climate protection. In this respect it is not just a question of the operation of buildings – but also a question of how buildings can best be constructed or their use changed. An important role is played here by the continued usage of older existing buildings: retaining the current fabric of the original construction and preparing it for the future is likely to be much more promising in the future than demolition and new construction. But just how great are the actual CO2 savings with such a conversion?

The independent case study by Werner Sobek AG takes a scientific look at the CO2 audit of our office property “FRANCIS” in Vienna’s “Althan Quartier” and reveals the enormous potential for savings.

So as to determine the savings from the conversion of an existing building, in our calculations the actual CO2 emissions have been compared with a notional demolition and new construction. But where would there have been emissions with such a new development – and how great would these have been?

First of all the actual demolition of the existing office building itself would have caused emissions. These would have amounted to 1,279 tonnes of CO2 equivalents. So as to compensate for this volume, a total of nearly 1,300 households would have had to utilise green electricity rather than conventional electricity for a whole year. In addition, at least 27,913 tonnes of CO2 equivalents would have been released in the course of the new construction work. This volume has been calculated on the basis of the concrete and steel required for the current space concept for the eleven-storey “FRANCIS” project, and thus includes the new storeys, therefore. “At least 27,913 tonnes” means the calculation is a conservative one because merely the construction quality of the original property was used as a point of reference for the lower storeys. A higher construction quality compared to the building originally erected in 1977 would require even more resources. Accordingly, in reality the CO2 footprint would be greater. 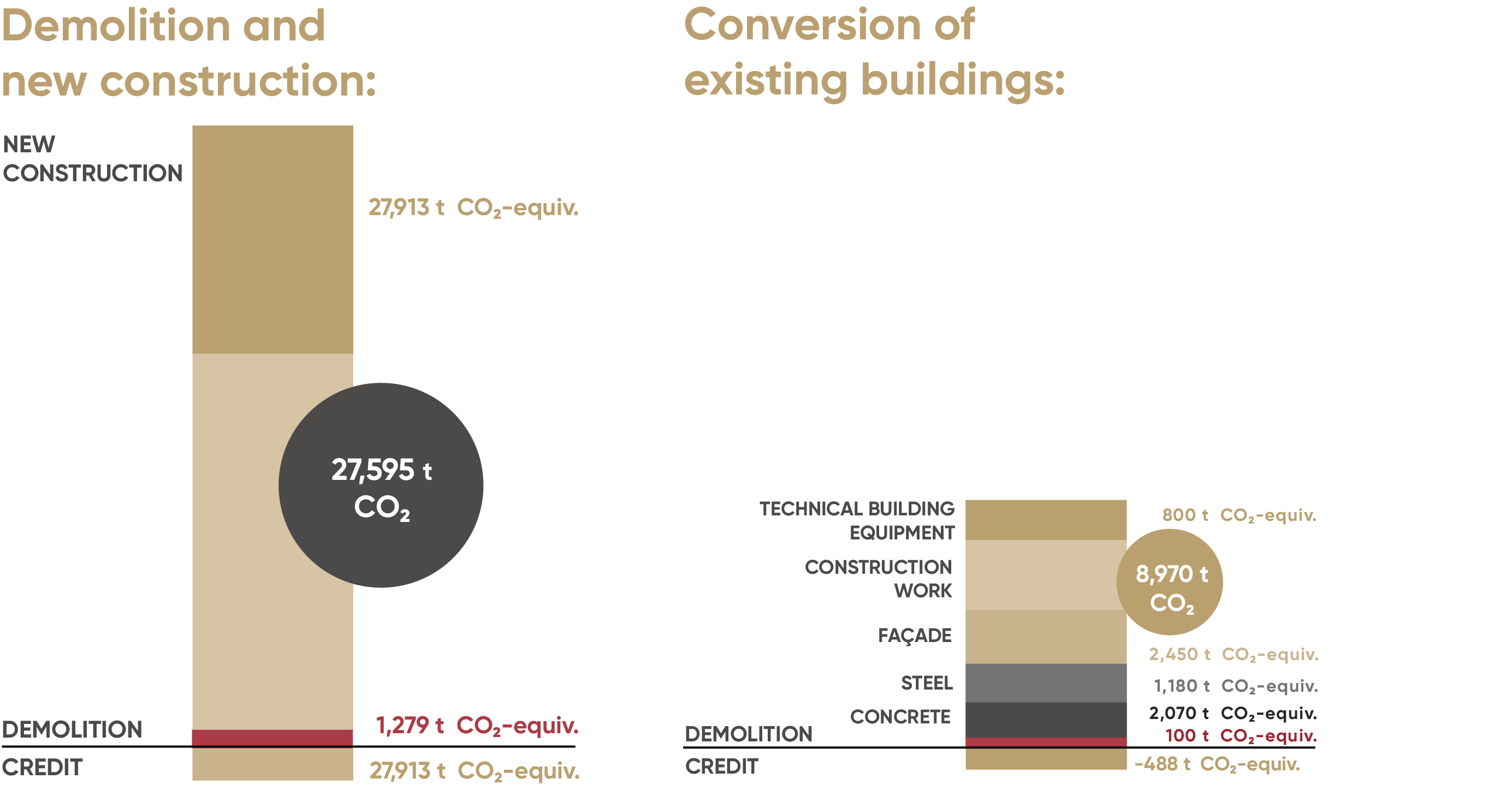 With this calculation it has to be remembered that some of the materials from the demolition work could have been recycled, however. If these had been reused, the burden posed by a new construction would have been somewhat lower: Werner Sobek AG has estimated a credit of 1,597 tonnes of CO2 equivalents here. The calculation “Demolition work plus new construction minus recycling” results in a net total of 27,595 tonnes of CO2 equivalents.

But what climate effects are we retaining in the existing building? Here we can see that it is above all the retention of the construction materials from 1977 that plays an important role. As the reinforced concrete skeleton is being reused more or less in full with “FRANCIS”, it is only the removal of the façade and the gutting of the building that play a major role. These measures merely account for 100 tonnes of CO2 equivalents. This is less than one tenth of the climate effect which would have been caused by the total demolition presented above.

As steel and concrete are merely required for the construction of the three uppermost storeys of “FRANCIS”, the emissions here total approx. 3,250 tonnes of CO2 equivalents. The new façade and any new construction work also rank among the significant items in the CO2 audit when converting an existing building. Just like the fictitious demolition and new construction there are credits from the recycling of materials, which is why the total volume of emissions is 8,970 tonnes of CO2 equivalents.

The total emissions with the conversion of an existing building amount to 8,970 tonnes of CO2 equivalents. There is thus a saving of 18,625 tonnes of CO2 equivalents compared with the totally new construction scenario. Such a figure taken alone may well seem quite abstract. In the sample calculation at the beginning of this article with one tonne of CO2 equivalents per household, it can be seen that an entire small town would have to convert to being supplied with green electricity to generate the same effect after one year. If trees were planted to compensate for emissions on this scale, 500,000 beech trees – the equivalent of a small municipal forest – would be required to bind this volume of CO2 for a year.

CO2 equivalents and CO2 – what is the difference?

CO2 equivalents take into account the fact that in addition to carbon dioxide there are other greenhouse gases, among them methane. These additional gases are converted to the corresponding amount of CO2 for the CO2 equivalents and added to the actual CO2 figure so that the total climate effect can be stated in a single figure. Just how great the differences can be between a consideration of CO2 alone and CO2 equivalents may be seen in electricity generation for instance. Depending upon the case in question the difference due to other gases can be more than ten per cent.

In the conversion of the “FRANCIS” building, some soft factors are also of consequence according to the Sobek study. Among other things the recycling – and thus the reuse of the existing reinforced concrete – leads to a fundamental reduction in noise and dust on the building site compared to full demolition and new construction. As significant amounts of the required materials are already on site when an existing property is converted, the necessary number of truck journeys to remove rubble and deliver materials is also reduced. The avoidance of demolition work in the case of “FRANCIS” meant that as many as 10,000 journeys were saved. This also reduces the inconvenience for local residents caused by noise and congested roads.

The “FRANCIS” study merely considers the environmental audit at the property and building materials levels – the above-mentioned journeys to remove rubble have not been included in the calculations. Where our study finishes, however, is where the 2020 report “Umweltfußabdruck von Gebäuden in Deutschland” [Environmental footprint of buildings in Germany] by the German Federal Institute for Research on Building, Urban Affairs and Spatial Development (BBSR) takes up. This shows that not only in the building materials industry, but also among suppliers the volume of greenhouse gases these create is approximately five times as great as the actual on-site construction. These figures are only taken into account in part in our calculations – the difference is probably actually correspondingly greater, therefore. This is just one of the reasons why we hope that the ‘“FRANCIS” model’ will – as what is probably the most sustainable office building in Vienna – also set a precedent at international level. 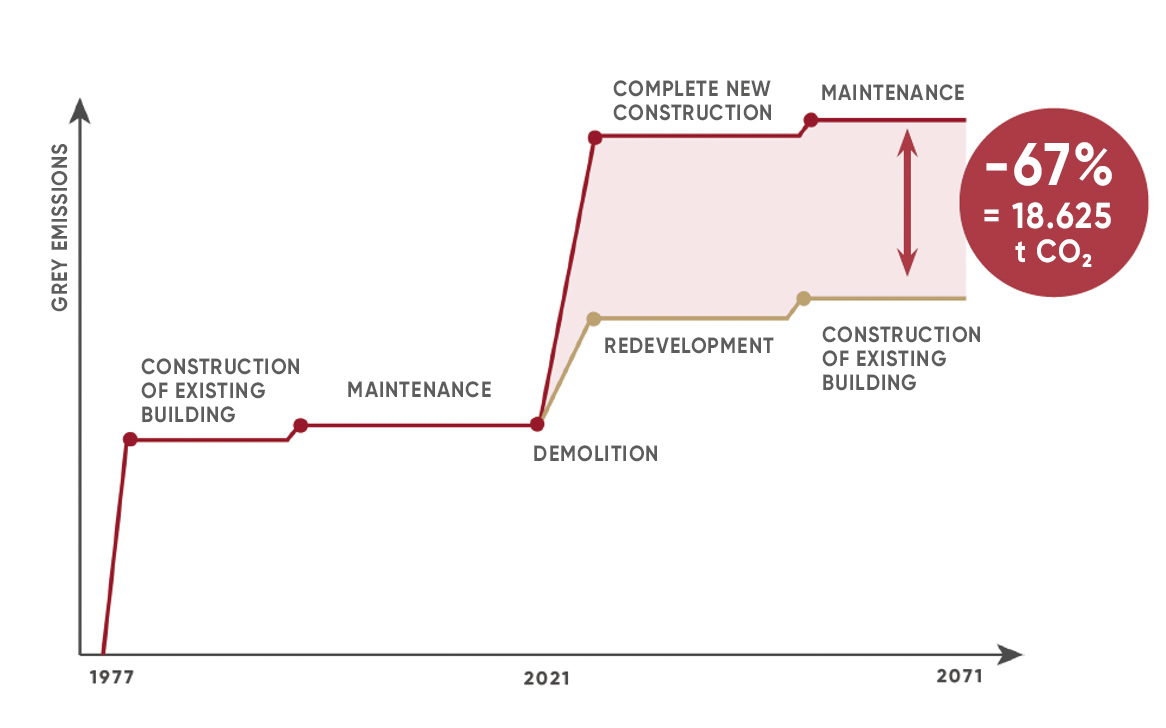 Issue 4/2020
Have we forgotten how to develop urban quarters?
Issue Q1/2022
FRANCIS will set new standards