Art in architecture: How a visual eye-catcher becomes a tangible investment factor 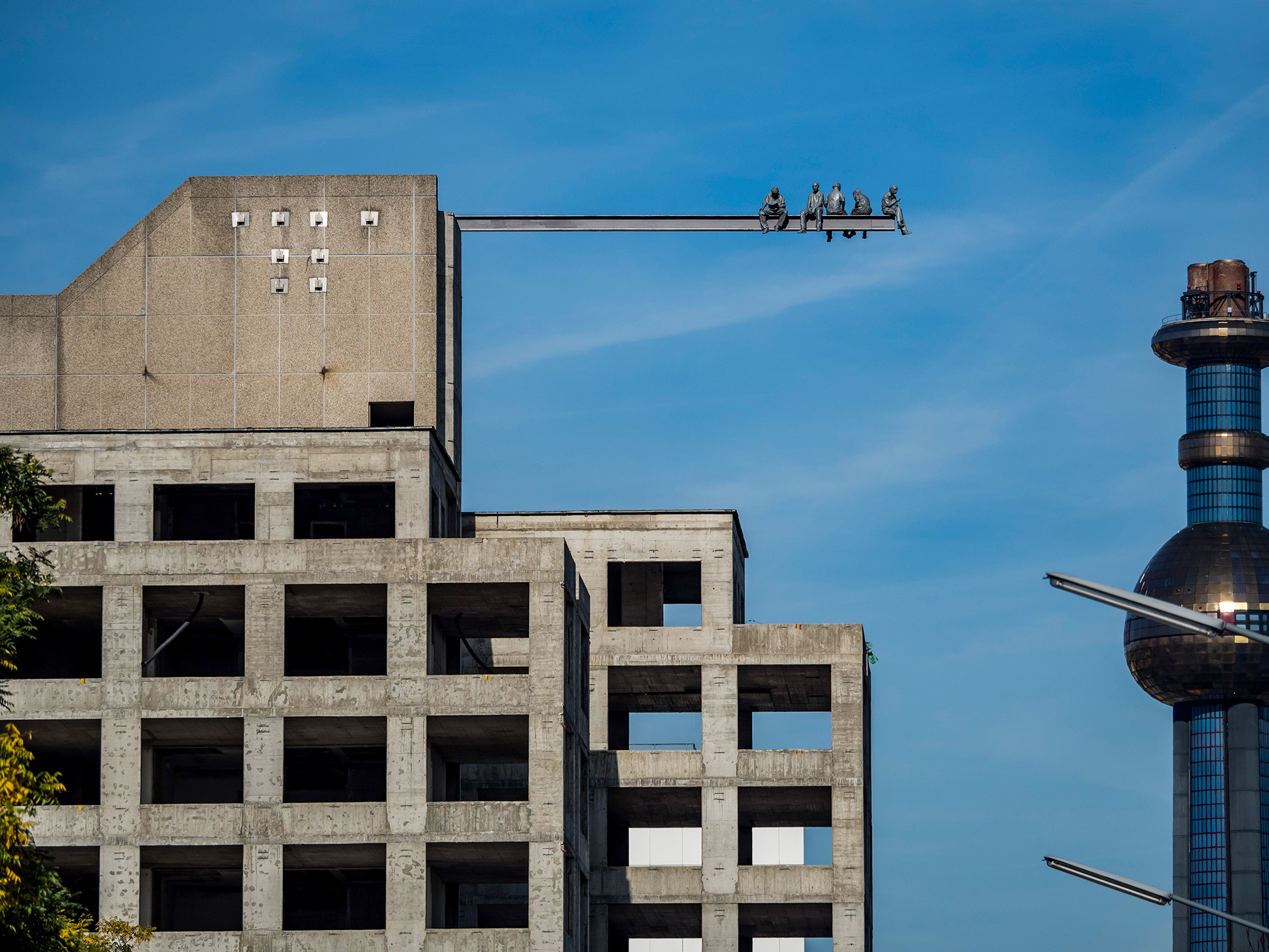 When it comes to ESG (environmental, social, governance, i.e. aspects of environmental, social and corporate sustainability) in the real estate industry, the focus is often on energy and environmental issues. But the S for Social should not be forgotten either. One important field is art in architecture. This involves promoting the arts and artists through real estate-related commissions. But art in architecture can do much more than simply support local artists.

In fact, art in architecture can create an additional link between society and the built environment. Or, to put it another way, it can create unique selling points and contribute to the positioning of a property. After all, a work of art can help shape a profile and offer a new perspective on the property or an urban space that would not otherwise exist.

For this, the work must deal with the location, the use as well as the architecture and adopt an appropriate approach. Either the aim is to reinforce the existing effect - or to set a targeted counterpoint. Art in architecture can be eye-catching. But it may deliberately do the opposite and blend inconspicuously with the property, requiring a second look. Whether this is done via a mural, a relief, a sculpture or perhaps video art depends on the case, and also on whether the art in architecture manifests itself on the facade or within the property. Depending on the concept, it may also enter into a dialogue with the project's surroundings beyond the boundary of the site.

Art does not have to contradict functionality

The principle is by no means new - buildings have been ornately decorated in every era. Art in architecture does not have to be at odds with functionality. This is demonstrated, for example, by the "Haus des Lehrers" (House of the Teacher) at Berlin's Alexanderplatz, which was built in the 1960s. On the third and fourth floors, a 125-meter-long and seven-meter-high pictorial frieze runs around the high-rise building on a ribbon-like concrete surface. The concrete ribbon undoubtedly has a strong effect on the urban space and the people; at the time, it was also designed to encourage dialogue. However, the image carrier seems to be rather accidental in the chosen position on the building, as if the ribbon could have been created at a different height. In fact, the position is a response to functional necessities: The third and fourth floors were to be windowless, because special library rooms were planned there. The massive concrete art thus also enters into a dialogue with the interior at exactly the right position. 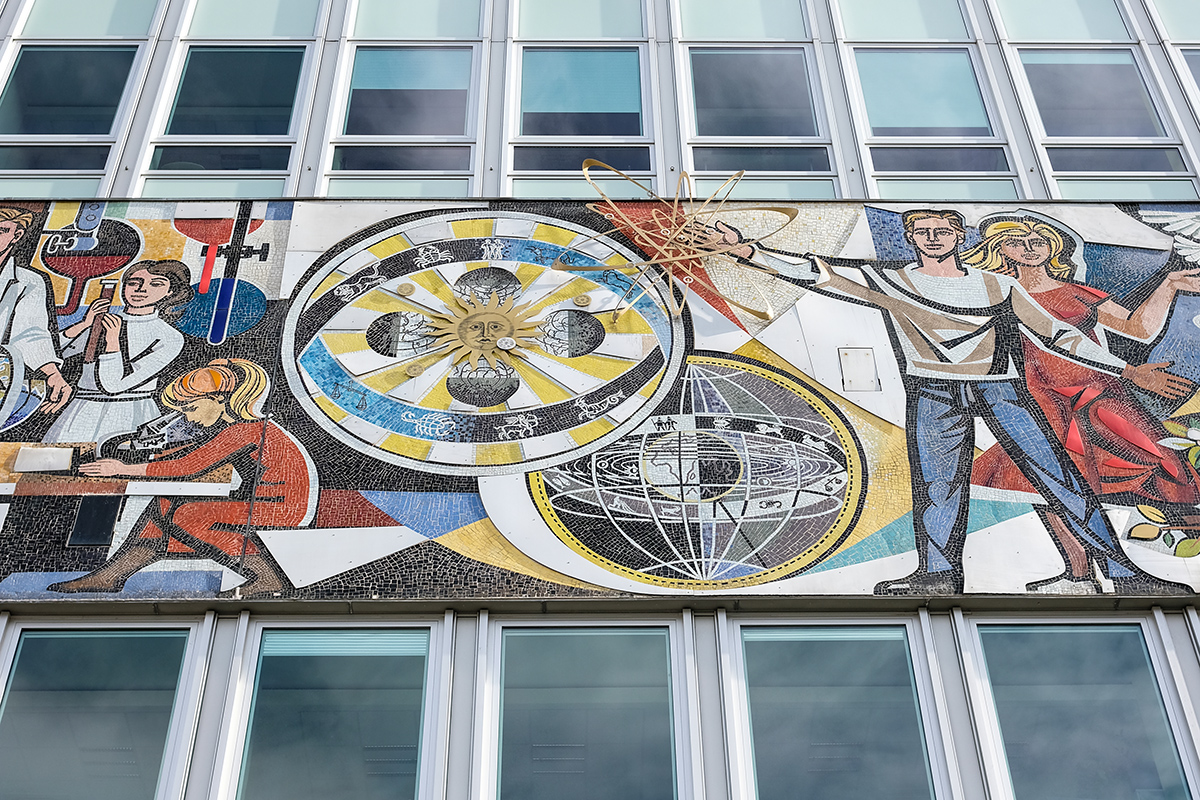 The "Haus des Lehrers" at Alexanderplatz in Berlin: Art in architecture from the 1960s; (c) shutterstock

In addition to the spatial-architectural reference, art in architecture is of course always about the degree of innovation and the originality of the artwork - and in the artistic context about the singularity of the work: about the method of creation or craftsmanship, and possibly about the process of production.

But does art have to be permanent, given the artistic context and the aforementioned dialogue? During the construction of the "Althan Park", we at 6B47 installed a work of art only for the construction phase: The installation "Lunch Atop" by the artist trio Steinbrener/Dempf & Huber featured five seated figures on a steel beam. This protruded twelve meters out over the edge of the roof and was visible from a great distance. The composition was reminiscent of the famous photograph of workers taking their lunch break on a steel beam in the clouds during the construction of the Rockefeller Center in the 1930s. The installation put the workers in the foreground - but we were also interested in presenting an extraordinary real estate project in a unique way. 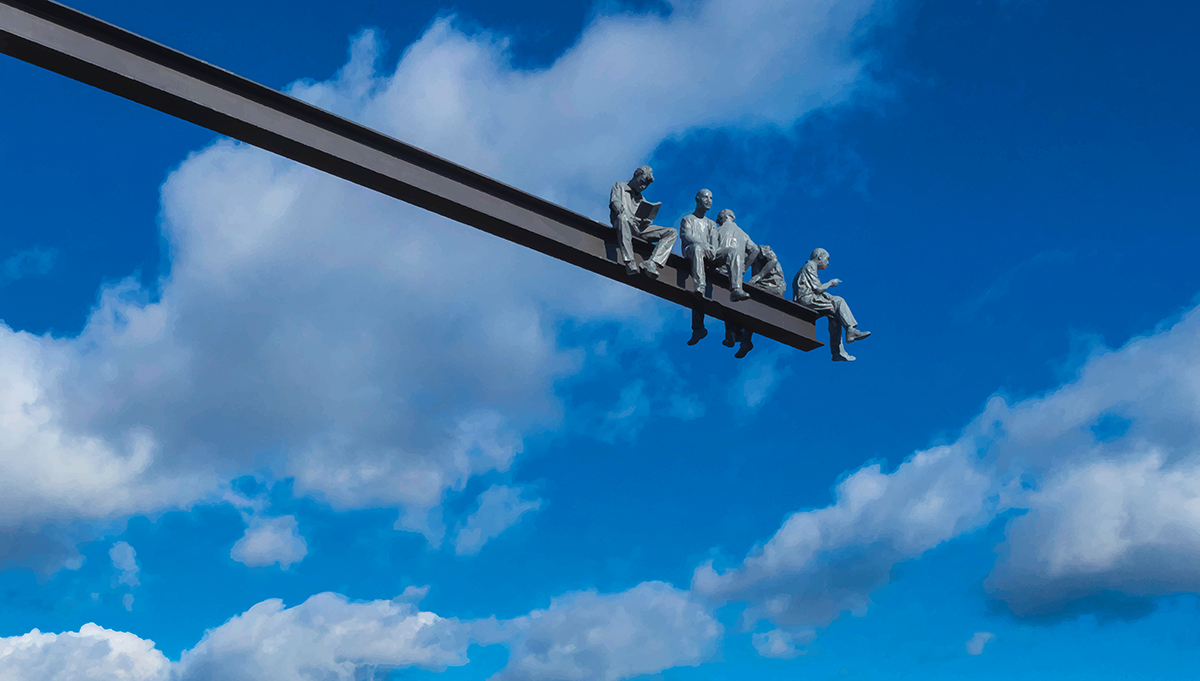 Under supervision and observation

Art in architecture does not always have to be beautiful or pleasing to the eye. The outdoor thermometer of the UN Climate Change Secretariat in Bonn, for example, is innovative but not necessarily aesthetic in the classical sense: it looks more like it was spontaneously pinned to the facade by a third party in passing and less like a tool that might actually be used by the UN climate professionals. Accordingly, the artwork does not indicate that the UN has global warming in mind from within the building. On the contrary, it is likely to indicate, precisely because of its size, visibility, and unfamiliarity, that people from outside have their eyes on the Climate Secretariat. That the UN and its work are being watched there. The society as a watchdog. 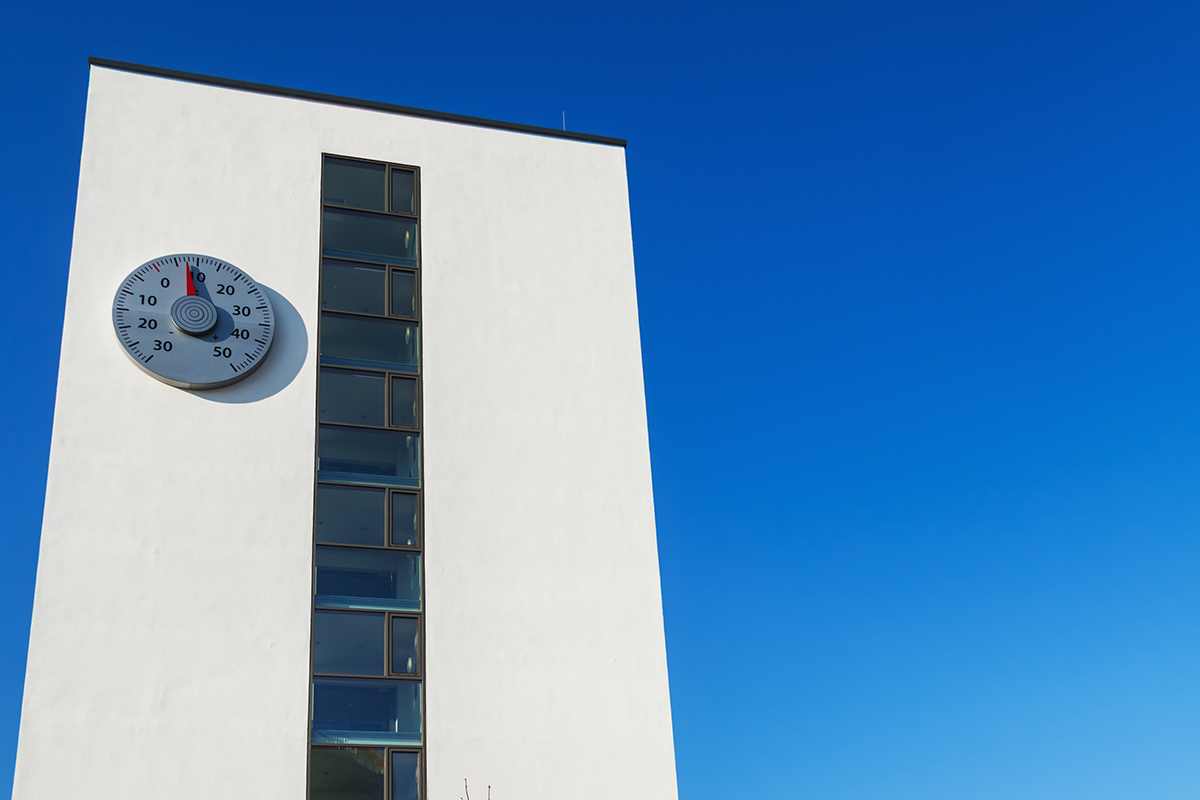 Beauty is not always the intention: This work of art hangs on the building of the UN Climate Secretariat in Bonn, Germany; (c) shutterstock

On the facade or on the property, art in architecture is usually freely accessible or at least freely visible. It thus has a different access for people than art in a museum or in an exhibition: it reaches both people who are interested in art and people to whom this does not apply. As a user or passer-by, people will engage with the work, which has an effect on the public space. With art in architecture, one brings the museum into everyday life, so to speak. In some cities, such as Berlin, a veritable network of properties featuring art in architecture has sprung up over the decades. A huge open-air exhibition of contemporary art spread over countless locations.

It's not just about ideal values

Beyond the social values, material values are also created. Ideally, works of art are created that would be sought after on the free market. However, the economic assessment of such works is difficult due to the lack of transparency of the art market. Art in architecture is deliberately completely removed from the market for a certain period of time. In appraisals of properties that score points for art in architecture, such works are therefore often undervalued. Art experts, on the other hand, have already put the value of some works of art in architecture at several million euros. Of course, a corresponding work of art cannot be marketed independently, which is why this theoretical value probably cannot be fully realized in practice. Nevertheless, it is a value-determining factor for the property, especially if the works of art continue to increase in value over the years in accordance with the rules of the art market.

But for investors, art in architecture creates further financial benefits. It creates a sense of wellbeing for all those who live and/or work in the property. On the one hand, this can sustainably increase visitor frequency at the respective location, which in turn benefits retail or leisure uses within a modern urban quarter. This can be further extended by organizing special art events on the site - as we were able to do in 2019 as a location partner of Vienna Design Week in the "Althan Quartier". On the other hand, art and culture also underline the potential for identification among tenants, which ultimately leads to greater locational loyalty.

Just as important as space efficiency

By the way: Art in architecture is also not new when it comes to measuring social sustainability in real estate. About ten years ago, art in architecture was already included in the early DGNB and ÖGNI catalogs as an indicator of the sociocultural quality of office buildings. In the DGNB catalog from 2008, the art in architecture factor is weighted just as heavily as, for example, the space efficiency within the building.

All these aspects show that the art in architecture factor is becoming increasingly relevant as an ESG, but also as an investment criterion. Particularly at a time when the social added value of real estate is being scrutinized ever more critically, it would be downright fatal to optimize a project development in terms of energy and ecology down to the smallest detail - but to lose sight of the aesthetic in the process. Because neither tenants and residents nor investors can enjoy unattractive real estate for long.

Create something new, preserve the existing

When it comes to art and culture in architecture, however, the issue is twofold: The approach of creating something new and realizing unusual "eye-catchers" in the form of a sculpture or a facade installation is only one side of the coin. It is just as important to preserve existing architectural jewels, or to transform them carefully so that they become part of an aesthetic and sustainable conversion. Both aspects are important to us at 6B47 - as the following articles with artist Martin Grandits and our case study on the conversion of Phil's Place demonstrate. 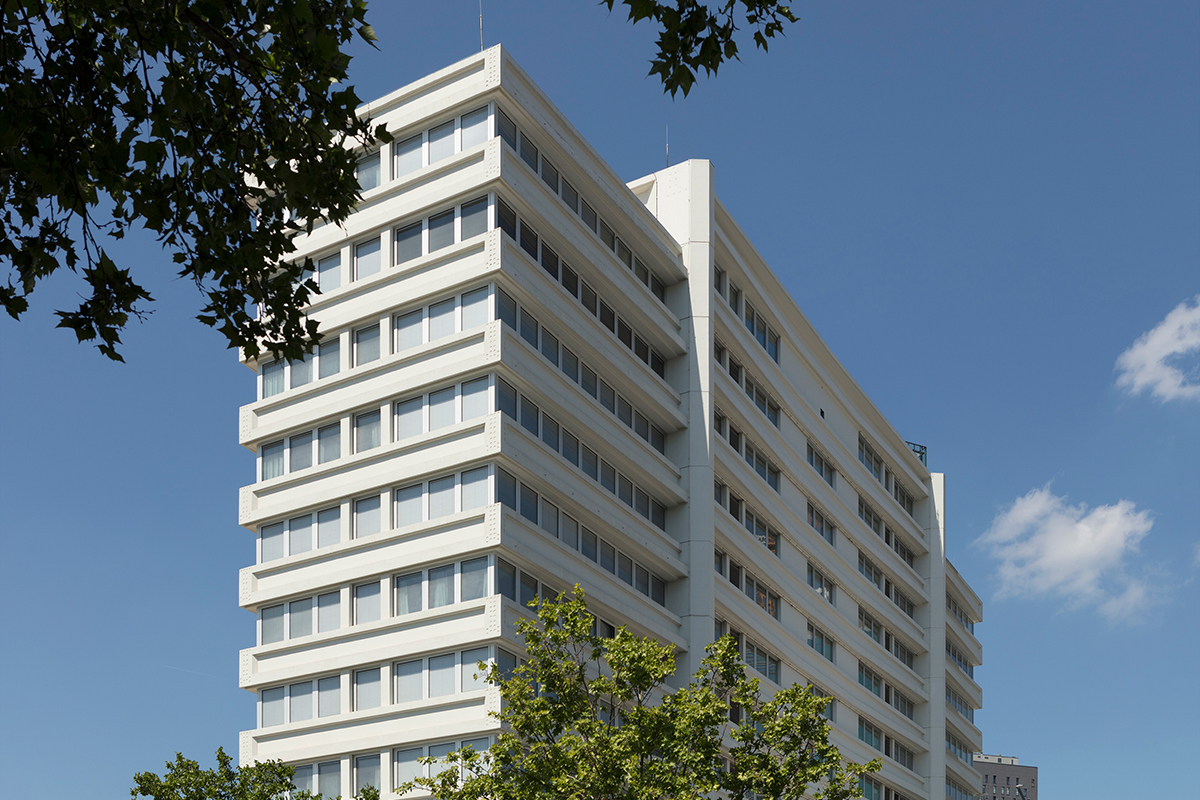 ISSUE 02/2022
Brave new financing world: Why banks are becoming more cautious - and how ESG is becoming a performance factor